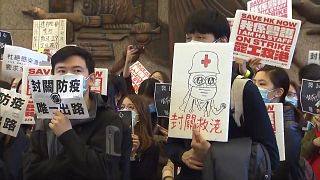 Earlier today, they occupied the lobby of the Hospital Authority headquarters, demanding to speak with the management.

After days of industrial action, it was the end of the strike this evening.

Many said the decision was based on concerns of a local outbreak of the coronavirus.

Earlier, those on strike were more militant.

"Useless government. We strike to save Hong Kong!"

Anger filled the air, as hundreds of members of the Hospital Authority Employees Alliance occupied the lobby of the authority's headquarters this morning.

But they were stopped by security. A man kneeled down, making an emotional appeal to an officer who was passing by.

He appeared to faint and was taken to hospital.

Senior officials refused to come out and, instead, issued a statement.

A spokesman said the union members barged into their office, disregarding their safety, and disturbed their work.

It added the management had been communicating with the union and hoped for a "constructive talk" to resolve issues together.

Despite their failure to get their demands realized, a front-line nurse said this is why he would return to work.