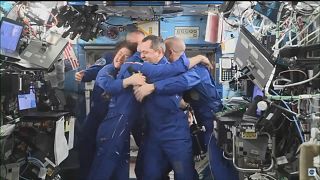 Parmitano and his crew NASA astronaut Christina Koch and Alexander Skvortsov of Roscosmos packed up and cleaned their crew quarters ahead of their return to Earth early on 6 February 2020.

The trio undocked and parachuted into Kazakhstan.

Koch is now in second place for the single longest spaceflight by a U.S. astronaut surpassed only by former astronaut Scott Kelly with 340 days during his final station mission.

Continuing their stay in space is Commander Oleg Skripochka of Roscosmos and NASA Flight Engineers Jessica Meir and Andrew Morgan.

They will end their stay aboard the orbiting lab and return to Earth in April 2020.