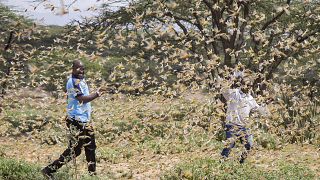 The most serious outbreak of locusts in 25 years is spreading across East Africa and posing an unprecedented threat to food security in some of the world's most vulnerable countries, authorities say.

Farmers in Kenya are asking the government to act fast to get rid of the locusts which "will destroy everything".

Roughly the length of a finger, the insects fly together by the millions and are devouring crops and forcing people in some areas to bodily wade through them.

The outbreak of desert locusts, considered the most dangerous locust species, has also affected parts of Somalia, Ethiopia, Sudan, Djibouti and Eritrea.

The Intergovernmental Authority on Development warns that parts of South Sudan and Uganda could be next.