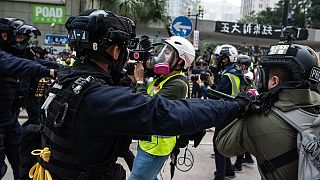 Police and protesters clashed in Hong Kong on Sunday cutting short a rally of thousands of people at a park.

Police had approved the rally but a march that organisers also planned was unauthorised.

Protests in Hong Kong have continued for months after the government proposed legislation that would have allowed residents to be extradited to mainland China.

The bill has since been withdrawn but protesters have expanded their demands to include more democratic reforms.