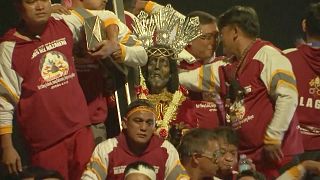 They threw handkerchiefs and surged forward for a chance to touch a black statue of Jesus Christ, called the Black Nazarene, that many believe can deliver miracles.

The statue was carried through the streets in a cart pulled by police officers, while barefoot, mostly male, devotees wearing traditional maroon shirts pushed against each other and stretched hands to get closer.

The lifesize Black Nazarene, crowned with thorns and bearing a cross, is believed to have been brought from Mexico to Manila on a galleon in 1606 by Spanish missionaries.

The ship that carried it caught fire, but the charred statue survived.

Some believe that the statue's endurance, from fires and earthquakes through the centuries, and intense bombings during World War II, is a testament to its mystical powers.

Dozens of Filipinos have themselves nailed to crosses on Good Friday in another tradition to emulate Christ's suffering that draws huge crowds each year.