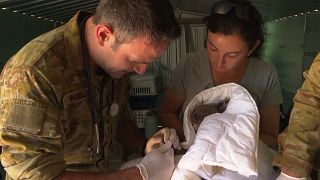 Captain Garnett Hall, from the Australian army, has been busy treating animals who have suffered burns, at the Kangaroo Island Wildlife Park.

"It's a pretty grim picture. Unfortunately, there's a lot of wildlife, a lot of livestock and a few companion animals that have been affected by the fires," Hall said.

Nearly one-third of the island has been devastated by the fires.

Located off the coast of South Australia state, Kangaroo Island is about 50% larger than Rhode Island and home to 4,500 people and what was a thriving ecotourism industry.

Experts working on the island say the fires have killed thousands of koalas and kangaroos.

More than 110 Army Reservists are working with local authorities to provide assistance to community recovery efforts on the Island, delivering tens of thousands of litres of potable water to replenish Kangaroo Island's supplies.

The fires, fueled by drought and the country's hottest and driest year on record, have been raging since September, months earlier than is typical for Australia's annual wildfire season.