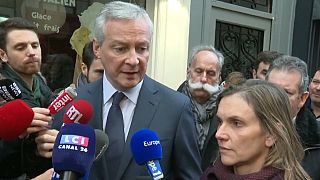 French Finance Minister Bruno Le Maire called on the American government to "come to its senses" over proposed retaliatory tariffs in response to France's technology tax in an interview with France Inter.

Le Maire reportedly wrote in a letter to the US trade representative that proposed retaliation would "deeply and durably" affect trade relations between the countries.

The US trade representative is planning to hold a public hearing on Tuesday to discuss a response to the French Digital Services Tax which the administration has already condemned as "protectionist" and "unfair".

The French levy imposes a 3% revenue tax on digital companies with global revenues above €750 million and above €25 million in France such as Amazon and Google. The majority of companies it applies to are American.

Last week, Le Maire wrote to United States Trade Representative Robert Lighthizer, cautioning him that France was liaising with the EU on the issue and that "various options" to defend EU trade rights were being considered.

Lighthizer said last month that he was considering steps to combat EU protectionism that he says is “unfairly targeting” American firms.