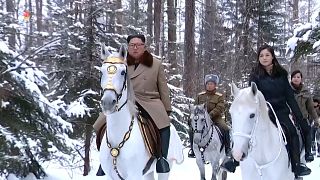 Experts say the footage is heavy with symbolism and may indicate a policy announcement.

The photos come as nuclear talks with the United States are stalled and with a looming end-of-year deadline set by North Korea for some kind of concession from Washington.

Kim — in a black leather trenchcoat he has worn recently to open a flagship construction project and supervise a weapons test — was pictured leading a squad of riders in a white forest near Mount Paektu.