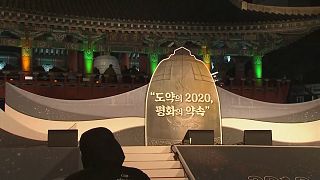 North and South Korea welcome in the new decade

Huge crowds in North Koreans gathered in the capital to countdown to midnight to bring in the New Year with a firework display.

Footage from the celebrations was broadcast by state media from Pyongyang.

Meanwhile, thousands of South Koreans filled downtown streets in Seoul for a traditional bell-tolling ceremony near City Hall to send off a 2019 that has seen political scandals, decaying job markets and crumbling diplomacy with North Korea.