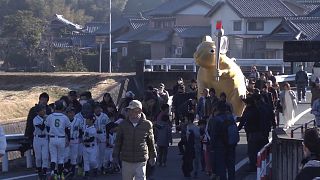 2020 will be the Year of the Rat. Volunteers and children helped put a large statue of next year's Chinese zodiac sign in a shrine in western Japan as an annual offering.

The three-meter-tall rat will remain at the entrance of Tatsumizu Shrine in the town of Misato in Mie Prefecture.

The group makes a giant zodiac sign every year to pray for people's happiness and an abundant harvest.

It took about one month to create the polystyrene sculpture. The golden rat is holding a torch as the members hope that many Japanese athletes will win gold medals at next year's Tokyo Olympic and Paralympic Games.

The group's leader, Kimio Masui, wished everyone a prosperous New Year. He added that he hopes the Tokyo Games will revitalize Japan.

The jumbo zodiac sign will be on display at the shrine until the end of February.