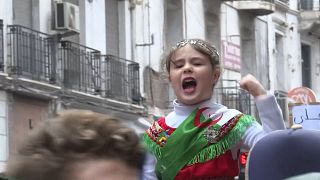 PROTEST PROTESTS IN ALGERIA ALGERIA
Now playing Next
no comment