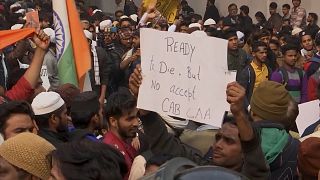 The university was the site of weekend clashes in which students accused police of using excessive force that left dozens in hospital.

Thousands of protesters stood inside and on the steps of New Delhi's Jama Masijd which is one of India's largest mosques.

They waved Indian flags and shouted slogans against the government and the citizenship law.

Eleven people have been killed and more than 4,000 others detained.

The law applies to Hindus, Christians and other religious minorities who are in India illegally but can demonstrate religious persecution in Muslim-majority Bangladesh, Pakistan and Afghanistan.

It does not apply to Muslims.

Modi has defended it as a humanitarian gesture.