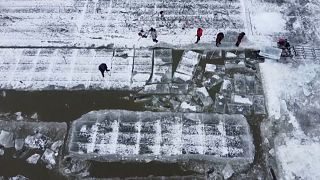 The workers behind China's frozen festival

Liu and his team are among more than 100 people who work on the Songhua River to harvest the 170,000 cubic metres of ice bricks needed this year — enough to fill 70 Olympic swimming pools.

Every year, a worker slips into the frigid water.

But that's a risk farmers are willing to take to earn extra money during the winter by harvesting the pieces used to make crystal palaces and sculptures at the Harbin Ice and Snow Festival.

Liu's team cuts out 2,000 pieces of ice every day for about three weeks, arriving before sunrise and leaving after sunset.

Resembling farmers ploughing a field, the teams use a large motorised saw to cut the icy surface, slicing it into rectangles until it looks like a bar of ice chocolate.

One by one, the crystal bricks are lifted onto a conveyor belt and picked up by a forklift that takes them to wait for trucks.

Despite slaving away on the frozen river, like most ice diggers Liu doesn't even go to the ice festival, which is just a few minutes away from the river.

Admission costs more than a half day's wages so he will just watch it on television.