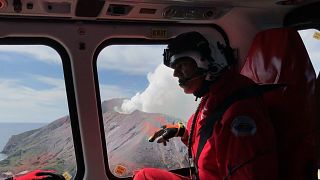 Unstable conditions hampered rescue workers from searching for at least eight people missing and feared dead after a volcano off the New Zealand coast erupted in a towering blast of ash and scalding steam while dozens of tourists explored its moon-like surface.

Six deaths had been confirmed as of noon CET on Tuesday (December 10).

After Monday (December 9) afternoon's eruption, helicopter crews had landed on White Island despite the danger and helped evacuate many survivors, some of them suffering critical burns.

But officials said on Tuesday they were still working with scientific experts to determine when it would be safe to return to the island to search for the missing.

Aircraft have flown over the island repeatedly, and "no signs of life have been seen at any point," Prime Minister Jacinda Ardern said.

White Island, also known by the indigenous Maori name Whakaari, is the tip of an undersea volcano some 30 miles (50 kilometres) off mainland New Zealand.