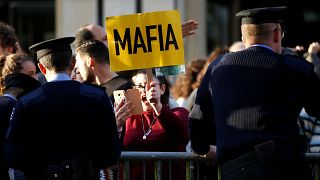 An egg was thrown at Maltese Justice Minister Owen Bonnici as he arrived for a meeeting with an EU parliament delegation. Protesters yelled "shame on you!" at ministers and Muscat as they arrived, escorted by police.

Member of European Parliament for Malta, Roberta Metsola, said on Tuesday (December, 3) she will ask for Maltese Prime Minister Joseph Muscat to resign immediately, as the delegation arrived for a meeting with Maltese officials on a fact-finding mission over the case of murdered journalist Daphne Caruana Galizia.

Muscat defended on Monday (December 2) his government's handling of the 2017 murder and called for national unity after days of protests over a case that has stunned Malta. He announced on Sunday (December 1) he would step down next month, giving his Labour party time to select a new leader, but protesters, opposition politicians and the family of Caruana Galizia have said this is not enough and that he should step down immediately.

Police on Saturday (November 30) charged one of the small Mediterranean island's wealthiest businessmen, Yorgen Fenech, with complicity in the killing. He has denied the accusations.