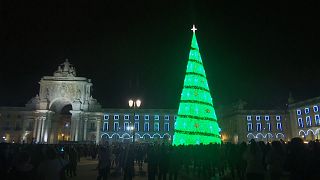 People gathered in Commercial Square in downtown Lisbon to see the lights turned on on a 30 metre (98 foot) high Christmas tree made from lights.

Lisbon will be decorated with 2 million lamps during the holiday season, City Hall announced.

The season to be jolly is upon us and cities across the world have turned on their festive lights.

In Washington, DC, US First Lady Melania Trump kicked off the holiday season by accepting delivery of the official White House Christmas tree.

A horse-drawn carriage delivered the tree to the front door of the White House as members of a military band played Christmas music.

The First Lady walked around the carriage inspecting the tree, which will become the centrepiece of Christmas in the White House Blue Room.

At the US Capitol, a 60-foot blue spruce that was recently cut in New Mexico's Carson National Forest was delivered at the back of a massive truck.

It took a number of workers and a giant crane to move it to its place in front of the building, where it will be decorated with thousands of handcrafted ornaments from residents of New Mexico.

The tree will be lit by US House Speaker Nancy Pelosi on December 4.

Catholic faithful at the Vatican will also be treated to a 26-metre (85 feet), 52-ton Christmas tree.

The spruce was transported by truck from Valdastico, an area in northern Italy that was badly hit by a storm in 2018.

The storm, known as Vaia, hit the territory over November and December of last year, causing the destruction of 14 million trees.

"This spruce was taken from one of the places destroyed by the Vaia Storm. We want to represent all the other spruces that have been destroyed by Vaia," says the Mayor of Valdastico, Claudio Sartori.

In England's grand country mansions, it's a last-minute dash to ensure all the lavish decorations are in place for Christmas.

At Chatsworth, one of the country's grandest stately homes, recent stormy weather and floods are adding to the pressure to get everything ready on time.

This year, there is a fairytale theme to the Christmas festivities.

The Delft porcelain on the dining table sits under a dazzling crystal chandelier. Hundreds of droplets reflect light off the hundreds of baubles in the trees and the gilt lined ceiling above.