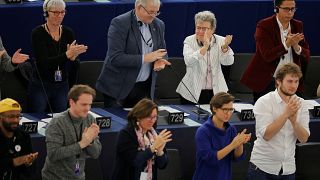 MEPs back 'climate emergency' resolution to up Europe's game

It means Europe has become the first continent to make such a declaration and comes amid a worldwide movement of youth climate protests demanding politicians take more action.

"It's about declaring a state of emergency, I would say in terms of climate and environment, but also to act accordingly, to take very concrete actions in line with this emergency," said French MEP Pascal Canfin.

"So it's not only declaring [an] emergency, it's also acting, taking the right political decisions, having this mindset.”

During Thursday's debate in Strasbourg, some MEPs brought up the environmental impact of the parliament's monthly routine of everyone travelling from Brussels. The travel alone is estimated to produce 19,000 tonnes of CO2 emissions.

However, reducing carbon footprints won’t be easy for some EU countries. Poland, for example, is still heavily reliant on coal — and while the motion is calling for a 55 per cent reduction in carbon emissions — green groups say it's still not enough.

"The 55 per cent target that the European Parliament and a number of governments are calling for is not yet in line with the 2ºC target," said Sebastian Mang, the climate policy advisor at Greenpeace's EU office.

"For Greenpeace and other environmental groups, this target needs to be ramped up to 65 per cent. This is what climate action looks like."

Wendel Trio, director of Climate Action Network (CAN) Europe, said the adoption of the resolution was important but "any such statement needs to be followed by emergency action".

"Parliament needs to push for real, immediate action. The EU needs to increase the climate target to at least 65% emission cuts, and adopt policies and measures that can reduce emissions immediately. People will continue to strike and go to the courts until the climate crisis is taken with more urgency and seriousness,” Trio added.

It comes ahead of next month's United Nations climate conference, COP25, in Madrid.

She pledged 3 trillion euros for tackling global warming and migration.

Von der Leyen placed emphasis on the necessity of measures to combat climate change being "inclusive", a recognition of EU members including Hungary, Poland and the Czech Republic having reservations about the executive's proposals.

'Climate change is an existential issue for Europe'

“If there's one area the world needs our leadership, it is on protecting our climate," she said. "This is an existential issue for Europe and for the world. How can it not be existential when 85% of people in extreme poverty live in the 20 countries most vulnerable to climate change?

"And we have to make sure that those needs are fulfilled in a sustainable way. It is a generational transition towards climate neutrality by mid-century. But this transition must be just and inclusive or it will not happen at all.

“It will need massive investment in innovation, research, infrastructure, housing, and the training of people. It will require public and private investments – at the European and at national levels.”

She also reaffirmed her determination for her team to tackle the migration issue with a common approach.

‘This issue has divided us, but we should step forward. We need solutions that work for all.

“This is the task that I have entrusted to Margaritis Schinas and Ylva Johansson. With their different skills and perspectives, they will form a formidable team.

“Europe will always provide shelter to those who are in need of international protection. And it is in our interest that those who stay are integrated into our society.

“But we also have to ensure that those who have no right to stay return home.

“We have to break the cruel business model of smugglers. We must reform our asylum system, never forgetting our values of solidarity and responsibility.

“We need to strengthen our external borders to allow us to return to a fully functioning Schengen. We need to invest in our partnerships with countries of origin to improve conditions and create opportunities.

“It will not be easy – but, let us remember the words of Václav Havel: It is the good thing to do.

“Migration will not go away – it will stay with us.”