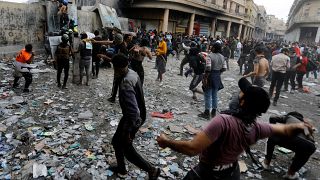 Twenty-seven Iraqi protesters killed in a day as violence continues

Protesters and security forces were seen throwing rocks and using slingshots as they clashed in the Iraqi capital of Baghdad on November 28.

They attempted to cross the Ahrar Bridge leading close to the heavily fortified Green Zone, the seat of Iraq's government.

Protesters are occupying parts of three bridges - Jumhuriya, Sinak and Ahrar - all leading to the fortified area.

Security forces have shot dead 27 anti-government protesters in a 24-hour period, amid spiralling violence in the capital and the country’s south. Authorities have imposed a curfew in the city of Najaf after demonstrators burned its Iranian consulate.

The protests, which began in Baghdad on 1 October and have spread through southern cities, are the most complex challenge facing the Shi'ite-dominated ruling class that has controlled state institutions and patronage networks since the 2003 US-led invasion that toppled long-time Sunni ruler Saddam Hussein.

The inability of Iraq's government and political class to deal with the unrest and answer protesters' demands has fuelled public anger.