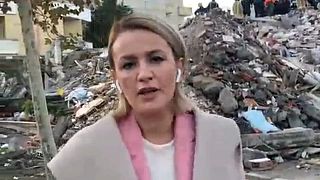 'One of the worst days in the Albanian people’s history'

The Head of News at Euronews Albania has given a personal account of the devastation in the port city of Durres after revisiting the site of damage caused by an earthquake on Wednesday morning.

The 6.4 magnitude quake which happened in the early hours of Tuesday was one of the strongest to hit Albania in decades.

Speaking on Good Morning Europe, Ilva Tare, Head of News at Euronews Albania spoke from the scene about the anxious mood:

“Now that I come again to this site, there is fear; fear of what’s going to happen and especially if there’s enough time to save survivors who may still be under the rubble.

“Today is a national mourning day for Albania; it should have been a week of national holidays and our independence day, but it is one of the worst days in the Albanian people’s history.

The tremor was felt across the southern Balkans and was followed by multiple aftershocks, with several above magnitude 5.

In nearby Bosnia, another tremor with a magnitude of 5.4 struck southeast of the capital Sarajevo and could be felt in the city, causing minor damage.

The quake in Albania destroyed apartment buildings and hotels.

There is as yet no indication of how many people might still be buried in the rubble, as neighbouring countries and European Union nations sent search-and-rescue crews to help.