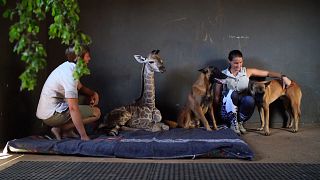 This baby giraffe is recovering at a rhino orphanage in South Africa after being abandoned by this mother.

He was taken in aged just two days old after being found in a comatose state.

"He was very weak, his mother had left him alone, so we had to put him onto IV fluids and yes he is doing a lot better now," said the orphanage's caretaker, Janie Van Heerden. "We feed him milk, he is trying to eat leaves, he is starting to try and he's doing a lot better. Possibly soon he will be able to go home."

The giraffe, named Jazz, is recovering under the watchful eye of a dog called Hunter.