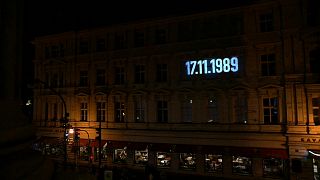 298/5000 This Sunday the Czech Republic celebrated the 30th anniversar

Czechs celebrated the 30th anniversary of the Velvet Revolution on Sunday (November 17), flocking to central Prague for concerts and speeches to mark the end of communist rule.

The festivities took place one day after a quarter of a million Czechs rallied against Prime Minister Andrej Babis and President Milos Zeman over concerns that the pair are chipping away at democracy in the nation 10.7 million people.

The two political leaders kept a low profile during the events, though Babis paid an early-morning visit to a memorial where police beat up student protesters in 1989 - a crackdown that sparked the wider rallies against the totalitarian regime.

The events on Sunday offered Czechs more of a party, with the unseasonably warm weather bringing out families and offering others a chance to sip beers while listening to the concerts and speeches.