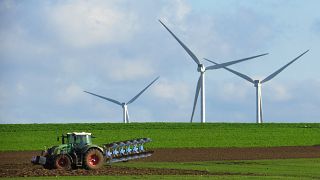 The European Investment Bank will stop funding fossil fuel projects at the end of 2021, it announced on Thursday, in a landmark decision for the fight against climate change.

It will stop most fossil fuel projects, including traditional use of natural gas, the bank's vice president, Andrew McDowell said.

“This is an important first step - this is not the last step,” McDowell said.

The ban on funding comes into effect a year later than originally proposed after lobbying by EU member states.

Under the new policy, energy projects applying for EIB funding will need to show they can produce one kilowatt-hour of energy while emitting less than 250 grams of carbon dioxide, a move which bans traditional gas-burning power plants.

Gas projects are still possible but would have to be based on what the bank called “new technologies,” such as carbon capture and storage, combining heat and power generation or mixing in renewable gases with the fossil natural gas.

Bertrand Camus, CEO of Suez, a France-based utility company, told Euronews that when it comes to green lending, for business, it's all about the combination of regulations and incentives.

“On one side the regulation that is determining what has to be done and what are the incentives we can put in place. I think that there are several aspects and one of them is to promote innovation.

"If you make an example with energy, you see it is from fossil fuel energy - now we are speaking about renewable energy, hydrogen, several sources of energy. I am convinced that in our environmental business it will be the same as long as there is vision, stability in terms of framework and right incentives.”

Environmental organisations celebrated the decision but expressed disappointment at the one year delay.

“Hats off to the European Investment Bank and those countries who fought hard to help it set a global benchmark today,” Sebastien Godinot, an economist at WWF EU said.

The EIB’s decision was expected, coming after EU finance ministers last week unanimously backed the phasing out of funding of gas, oil and coal projects, to help combat climate change.

A decision on fossil fuel funding was planned already last month but was postponed due to divisions within the bloc as some countries wanted gas funding to continue, prompting McDowell to write a letter to the bank’s current 28 shareholders, the EU member states, on November 5.

Incoming European Commission President, Ursula von der Leyen, has outlined a plan to tackle climate change. The EIB is central to the ambitious plan, which would see funding increase for renewable energy while phasing out reliance on fossil fuel.

But several EU countries still rely heavily on fossil fuels to power their electricity grids, which means any policy change needs to strike the right balance between combating climate change and keeping the lights on across the continent.

And according to the EIB, change needs to occur in a way that keeps the public on side.

"There is a very important aspect of the transition. and we have seen that on all protests, not only young people but also yellow vests," said Nancy Saich, the bank's chief climate change expert.

"If we don’t address people's livelihoods and their jobs are at risk because they are working in coal or they are working in a high emitting industry - if we don’t take that into account and don’t give them opportunities for work and jobs in the future - then we will not be addressing everybody. We have to do this in an inclusive way. And try to leave nobody behind," she told Euronews.

Still, 93% of Europeans think climate change is a serious problem, according to recent Eurobarometer research. The survey also suggests climate change has overtaken international terrorism as the second most serious concern in Europe after poverty, hunger, and lack of drinking water.

With that level of backing, the EIB's decision to halt funding of oil, gas and coal projects will likely be met favourably by European voters.