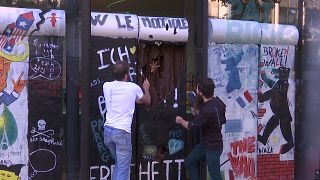 The Berlin Wall fell again — but this time it was made entirely of chocolate.

The Berlin Wall fell again — but this time it was made entirely of chocolate.

French chocolate maker Patrick Roger built a chocolate bar in Paris to celebrate the 30th anniversary of the fall of the real wall.

On Saturday, he removed the creation in front of one of his shops and distributed parts to people who came to see.

"It's amazing, 200 kilograms of chocolate went in a few minutes," he said. "It's amazing to share taste, values ​​and certain winds of freedom because we all need them at these times. I even have goosebumps as I'm talking about them."