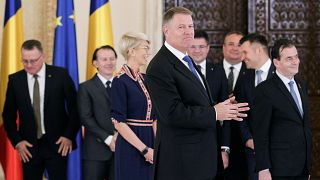 Is Romania's presidential election a race for second place?

Romanians go to the polls on Sunday to choose a new president amid great political instability.

Just before this election, the brand new Government of Prime Minister Ludovic Orban survived a confidence vote. However, uncertainty looks set to continue.

Among the political fights, the figure of the current president Klaus Iohannis stands out.

Polls give him around 45% of the vote.

Ioannis started his political career in 1990, but it was not until 2009 that he appeared on the national politics. In 2014 he was elected president.

He is one of the main supporters of the strategic alliance with the US, and for many Romanians, he symbolises a different kind of politics.

If there is a second round of voting, three candidates could challenge Ioannis.

One is actor Mircea Diaconu, running as an independent and trying to attract a more traditional electorate. The most recent polls have predicted him a 15% share of the votes.

According to the Romanian press, the biggest challenger to Ioannis is former Prime Minister Viorica Dancila, supported by the Social Democratic Party - or PSD. Though traditionally a political powerhouse, the PSD’s popularity has slumped in recent years.

That would not be a problem for Dan Barna, third or fourth in the polls, as his supporter base overlaps Ioannis - both address mainly the anti-PSD electorate.

Good Morning Europe spoke to journalist Kit Gillet in the Romanian capital of Bucharest. Watch the full clip in the player above.