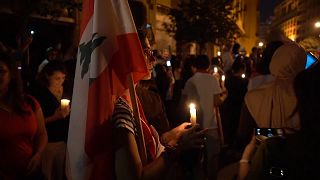 The women were protesting just hours after sources revealed that Lebanon's Saad al-Hariri, who resigned as prime minister last week, had a positive meeting with leading politician Gebran Bassil and all ideas were discussed for getting the country out of economic crisis.

"All ideas were put on the table for what would be best for Lebanon to come out of the economic crisis and what would best heed the calls made by protesters in the past three weeks," the source said of the meeting at Hariri's Beirut residence.

It was his second meeting there with Bassil in three days.

Hariri's resignation was prompted by an unprecedented wave of protests against the ruling elite that has swept Lebanon since Oct. 17, tipping it into political turmoil at a time of acute economic crisis.

Bassil, a son-in-law of President Michel Aoun, was foreign minister in the outgoing Hariri cabinet and is a political ally of the powerful and heavily armed Iran-backed Shi'ite group Hezbollah.