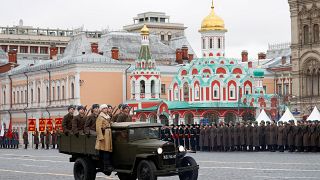 More than 4,000 Russian soldiers marched on the cobbles of Moscow's Red Square on Thursday (November 7) to mark the 78th anniversary of Soviet soldiers heading to the front lines of World War Two.

In addition to vehicles from the period, decorative anti-tank obstacles and a brass band, soldiers in period uniforms re-enacted the original 1941 parade.

At that time, German forces were on Moscow's doorstep and the parade was held to raise the morale of the Soviet troops during the defence of the city.