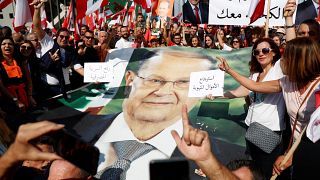 Thousands of protesters rallied outside Lebanon's presidential palace on November 3 in a show of support for President Michel Aoun, after protests called for the ousting of the political elite.

A huge convoy of cars, some waving Aoun's orange Free Patriotic Movement (FPM) party flags and Aoun's portrait, snaked across a main highway as a sea of protesters marched to Baabda palace.

It was the biggest counter-protest to the massive wave of demonstrations that have gripped Lebanon since October 17, and which have included Aoun's removal among its demands.

The protests have been less intense since Hariri resigned, but demonstrators remain on the streets and a core demand is the rapid formation of a government led by technocrats.