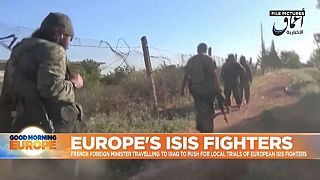 French foreign minister travels to Iraq to discuss IS fighters

France's foreign minister will travel to Iraq today to discuss trials for so-called Islamic State (IS) fighters from Syria.

European countries are trying to fast-track a plan to move thousands of foreign militants out of Syrian prison camps and into Iraq.

Foreign Minister Jean-Ives Le Drian will spearhead talks with the Iraqi government to try and create a legal framework to oversee the trials.

The Iraqi government is seeking millions of dollars in financial compensation for taking European fighters.

"The subject with the Iraqi authorities is to find a judicial system that could try all these fighters, including the French ones," Le Drian told BFM television ahead of his trip.

Iraq saw some of the bloodiest battles against IS and its government is already conducting trials of thousands of suspected insurgents.

Le Drian said women who had joined IS should also face justice in the region, although Paris would look to bring back children.

"The French women who went to this region in 2015 knew what they were doing. They aren't tourists. They are fighters against France and must face trial (in Iraq) if possible," he said.