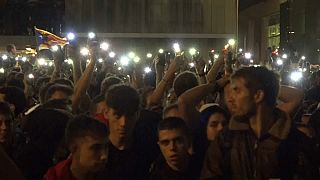 Catalan activist condemns severity of sentences for separatists as anti-democratic

A Catalan activist and political commentator has condemned the sentences handed out to pro-separatist leaders as undemocratic.

Thousands of protesters took to the streets of the Catalan capital Barcelona on Monday night after the country's Supreme Court convicted 12 Catalan separatists of illegally promoting independence in a referendum two years ago. Nine of the 12 Catalonian politicians and activists were found guilty of sedition and given prison sentences of between nine and 13 years.

Andres da Silva told Euronews' Good Morning Europe that the severity of the sentences was undemocratic and greatly worsened the situation:

"Spain does not really want to solve this issue, it is not interested in a peaceful resolution to the Catalan conflict, otherwise they wouldn’t have sent their political opponents to prison.

"I think Pedro Sanchez and his government have started a propaganda campaign that Spain is a consolidated democracy. But it is far from that, because in the western world, democracies do not attack their political opponents by putting them in jail.

"History will not be generous to Pedro Sanchez and the way he has behaved with this process."

"Today an exemplary judicial process has concluded. But at the same time, today confirms the sinking of a political project that has failed in its attempt to obtain internal support and international recognition, leaving behind pain and confrontation, the fracturing of coexistence in Catalonia.

"From today, if we leave behind extremism, we can begin a new era where the return to harmony is one of the main pillars of Catalonia."

"The sentences of the Supreme Court against the members of the government, the parliament and the most important social entities of Catalonia, confirms the strategy of repression and revenge against all those citizens who have sought the path of democracy to make their will possible.

"By condemning them, they condemn more than two million people who made possible the self-determination referendum of October 1 (2017).

"No propaganda strategy in the world could mask so much shameful an injustice. The huge decision of the Spanish justice system marks the dawn of a new era in which exercising fundamental rights and freedoms will be restricted to all citizens.

"And the legitimate option of pursuing independence through any democratic channels will be persecuted under suspicion of sedition.

"Their silence contributes towards the irreversible erosion of a Spanish democracy. The Europe that says nothing in the face of the Turkish atrocities against the Kurds, is the same Europe that kept quiet when the police in a member state used terrifying violence as they attacked people going to vote."