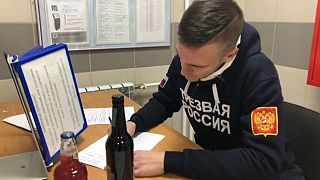 A late-night vodka in Moscow might be a Russian tradition, but not for much longer if one group gets its way.

A group of activists known as Sober Russia are fighting this national habit, which, although on the decline, continues to put thousands of people in hospital.

Russian law prohibits selling alcoholic beverages during the night, with those caught buying and selling booze after hours facing fines of up to €1,500 euros.

It is one of several state measures to curb alcohol consumption in Russia, with a recent report by the World Health Organisation showing it fell 43% between 2003 to 2016.

However, some outlets are ignoring the law.

“In addition to the legal part of the market, there is a counterfeit part, which also needs to be fought,” he said.

Experts say that Russia’s counterfeit industry is worth more than €30 million annually, and it’s growing.

“The state understands this, makes some attempts, but so far they are futile. Our efforts alone over the past year have revealed more than 1,500 tonnes of counterfeit alcohol,” Hamzaev said.

The illegal sales are a public health risk, according to the group. Every year more than 100,000 Russians seek medical aid after drinking fake alcohol.

In 2016, 62 people died in Irkutsk from poisoning from batch of counterfeit alcohol.