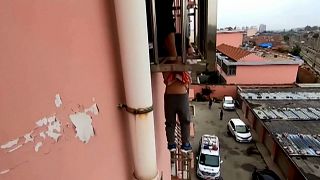 Firefighters rescued a boy, 4, who was clinging to the outside of a fourth-floor window of a residence in China's Shandong Province on Monday.

Firefighters rushed to the scene after receiving the call from the boy's grandfather.

In order to prevent him from falling, the rescuers quickly fastened a security rope around his chest, while residents from the building held out quilt below.

After firmly securing the boy, the rescuers used a hydraulic machine to widen the bars and lifted the boy to safety.

His grandfather said he was taking a nap when the accident happened, adding he was awoken by his cries and immediately called the emergency services.