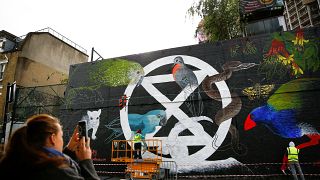 A mural of Extinction Rebellion was painted onto the side of an east London nightclub on Sunday (October 6), a day ahead of a planned new round of protests by the climate activist group.

The mural showed the group's logo surrounded by various animals, including several birds of paradise and a snake.

On Monday (October 7), the group is expected to hold demonstrations in London with the aim of shutting down major roads near Britain's parliament in Westminster.

In anticipation of the protest, British police arrested 10 of its activists on Saturday (October 5) in London, using a battering ram to break down a door and enter a former court building that was used by Extinction Rebellion to store equipment.

A spokeswoman for London's Metropolitan Police said seven women and three men had been arrested on suspicion of conspiracy to cause a public nuisance.

Extinction Rebellion is calling for the UK to reach net-zero carbon emissions by 2025. It accuses the British government of investing vast sums in carbon-intensive projects that are inconsistent with its stated environmental aims.

The group says it wants non-violent civil disobedience to force governments to cut carbon emissions and avert a climate crisis it says will bring starvation and social collapse.

The group disrupted London with 11 days of protests in April that cast it as the biggest act of civil disobedience in recent British history.