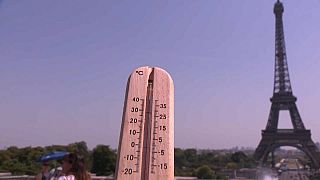 A climate change expert has said world governments must realise that green climate initiatives are actually good for the economy.

“Governments have to realise economic growth and development is consistent with action to reduce climate change. Take the example of cities; cities that are polluted and congested because of poor planning and with diesel and petrol to drive their your transport, that’s not a very productive environment.

“If you have a better-planned city, with transport more reliant on electricity and hydrogen, you have less time stuck unproductively in traffic jams.

“You will also improve air quality and reduce the impact of climate change which is beneficial to the economy as well.”

Ward’s comments come ahead of the United Nations Summit on Climate Change which begins next week and follow Greta Thunberg addressing a US Congressional hearing on Wednesday. The Swedish climate change activist urged congressmen and women “to listen to the scientists and act”.

Friday also sees a major initiative by the German government which will be convening a ‘climate cabinet’ to decide on a range of measures to fight climate change.

The German government’s special sitting will present its long-awaited plan to ensure that the nation sticks to its climate goals; so far Germany has not been able to stick to the planned reduction in CO2 emissions.

Some members of the coalition are pushing for swift action on measures including a carbon tax, support for electrification, subsidised train travel and more expensive domestic flights.

Friday is also the first day of the Global Climate Strike and tens of thousands of people are expected here in central Berlin.

Ward also told Good Morning Europe that much more needs to be done:

“It’s clear that governments are not doing enough and they recognise that. The 2015 Paris agreement limited the increase in temperature to well below 2 degrees (above pre-industrial levels), but if you put all the plans on the table and add them up, those plans are not consistent with that goal.

“We are approaching the 5th anniversary of the agreement and governments have to come up with revised pledges of action with increased ambition.”

“The summit that the UN Secretary General is holding on Monday is about building momentum and convincing world leaders that they need to do far more than they are doing.

“We have to see what world leaders deliver, but it shows that they recognise the seriousness of the issue.”