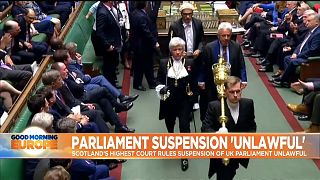 A Scottish court ruled on Wednesday that the suspension of the UK Parliament was unlawful. The decision has put Prime Minister Boris Johnson under pressure to recall MPs. The case has now been referred to the UK Supreme Court where it will be heard next week.

Steven Peers is a professor of law at the University of Essex and he also thinks it is possible the Queen was misled by the UK government:

"The implication of what the Scottish court said is that the government didn't give it genuine reasons in court for suspending parliament, it pretended it was just a technical thing whereas its real reason was about its Brexit policy. So it's possible that they also misled the Queen.”

Meanwhile, politicians from the opposition parties are piling the pressure on Boris Johnson to recall parliament. The Scottish First Minister Nicola Sturgeon is one of them:

"This ruling today has enormous constitutional significance... We have a court saying that the prorogation of parliament is unlawful, null and void,” Sturgeon said.

The Scottish leader went on: “It seems to me incumbent on the prime minister to end that illegality by immediately recalling parliament. That is the right thing to do as a matter of principle, but there is a real practical imperative to have parliament sitting right now. This is a government that really needs to be scrutinised and held to account."

The Scottish judges were unanimous that on their conclusion that Boris Johnson used the suspension of Parliament for the wrong reasons. But it is unlikely that the prime minister will decide to recall the House before Tuesday when the case goes to the UK's Supreme Court for a final ruling.