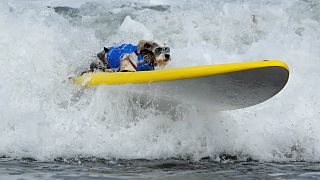 The dog days of summer may be over, but that didn't stop some canines from hitting the beach for a little bit of sun — and surf!

More than 70 competing surfing dogs hit the waves off Del Mar North Beach to claim their bone as top surfer. There was also a canine costume and interactive booths. 100% of the proceeds went toward helping orphan pets.

Leading the pack was Faith, a rescue-pitbull who claimed this year's title of "first overall", and the costume contest winner was a dog named Sparkle who was dressed as Baby Shark.

There was even a Hall of Fame ceremony with surfing pups Kona and Antonio joining the prestigious group.

For more information on the Surf Dog Surf-A-Thon, visit www.animalcenter.org