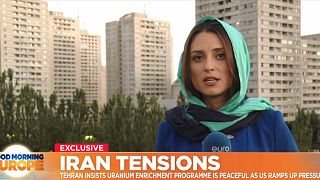 Inside Iran as international pressure mounts over nuclear programme

Iran has doubled down on its threat to accelerate its nuclear programme.

President Hassan Rouhani has reiterated his demands that Europe come up with a solution for the country to sell its oil abroad in the face of increasing U.S. sanctions. It's the latest attempt to up the ante in an increasingly bitter contest of wills between the west and the Islamic Republic.

Euronews' International Correspondent, Anelise Borges, has travelled to Iran to see how Iranian citizens who are getting caught up in the political crossfire between Tehran and Washington.

This is her report from the capital, Tehran.