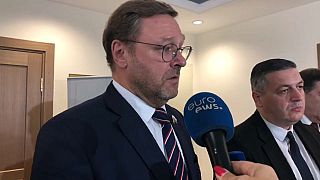 Representatives of Russia and Georgia have met for the first time since mass anti-Russian protests in the Georgian capital Tbilisi last month.

Around 240 people were hurt as protesters tried to storm the parliament after a Russian MP took the speaker's seat.

Both the Russian and Georgian delegations confirmed there had been no major breakthrough in their initial discussion.

Speaking immediately after the meeting, Konstantin Kosachev, chairman of the International Committee of the Russian Parliament, said: "We definitely found that the patriots of Georgia understand what’s in their national interests – that is, normal, good relations with Russia.

"In order for this to happen, there’s a lot to be done and we can’t expect miracles.

"It’s unlikely that there’ll be a major breakthrough in these relations in the foreseeable future – this will most likely take months, but we hope not years. Most importantly, we hope there will not be new provocations.

"Because what happened in the Georgian Parliament and on Georgian television was a pure provocation aimed at disrupting the normalisation of our relations."

His counterpart, George Lomia, Chairman of the Patriots of Georgia agreed: "We discussed a number of possible solutions for overcoming the crisis.

"We won’t discuss it now, because those opposed to good relations between Georgia and Russia will try to thwart these plans.

"Friendship with Russia is very important for us. We will meet more than once to discuss the issues, it takes time for all this to be resolved."