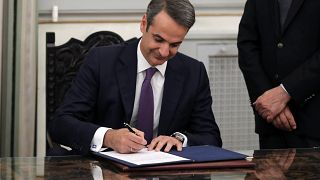 Q&A with Nick Malkoutzis, the editor of Macropolis polling and data firm.

Answers have been lightly edited for clarity.

Some are saying that New Democracy has come to power based on a wave of discontent with Syriza. What kinds of problems does this new government now face?

NM: The first challenge is on the economic front, although Greece's economy has been through a very long and deep recession, the economy has been recovering over the last two years. But that recovery has been relatively shallow. So one of the main things that New Democracy is promising is to try and double the growth rate from around two per cent to four per cent. And they want to do with by cutting taxes and increasing investments, and at the same time, promising more jobs and better paid jobs. So it's a tall order given what Greece has been through over the last ten years. But I think also, the style of governing will be important- the idea that a lot of the result of the election on Sunday was determined by negative sentiment towards Syriza, and I think this had a lot to do with their style of governing. It was very much along the lines of previous parties, trying to interfere in the judiciary, in the media, using public sector jobs to buy votes. And I think people are fed up with this in Greece, and they want to see a new style of politics.

What do you think of the new Cabinet, can it respond to those big issues that drove people to the polls?

NM: The Cabinet is much bigger than a lot of people expected. So 51 people in the Cabinet is more or less along the lines that we've come to expect, and that's seen as a bit of a negative. And at the same time, there are 21 people who are non-Parliamentarians, technocrats or experts in their field if you like. And I think it will be the success or failure of these people that will largely determine whether this Cabinet is seen as a success. And one thing that people are pointing out is the distinct lack of women, only around ten per cent is made up of women and for a European country and a new government coming in, trying to send a progressive message, that raised some eyebrows.

The EU are going to be keeping an eye on Greece's spending. Can this new government deliver on its promises that have to do with its creditors?

NM: Well, that's the first big challenge. Because Kyrikos Mitsotakis, the new Prime Minister has promised tax cuts straight away to kick in from the first of January. The problem he has is that despite being outside of the adjustment programs, Greece still has a very high primary surplus target to meet. Three and a half per cent. And yet, at yesterday's Eurogroup, several top European officials underlined that there is no scope at the moment for these targets to change. So that will be one of his most difficult discussions ahead to try and win over his creditors and possibly bring that target down, although the indications are at the moment that there isn't a willingness on the other side to discuss it.

Watch the interview in the video at the top of the page.