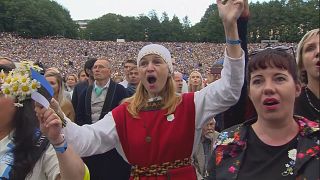 The event is held every five years and started as a song-only celebration in 1869.

The tradition of singing is closely linked to the emergence of the country's national identity and inspired the defiant "Singing Revolution" in the late 1980s that ended nearly fifty years of Soviet occupation.

More than half the singers were under 30 years old and would have only known Estonia as a free country, yet the sounds still ring out loud and have deep meaning for this new generation of choir singers.

The 7-hour concert culminated with a song My Fatherland is My Love which is also the motto of the Song and the Dance Celebration.

Whilst the display of patriotism across Europe is often closely linked to populism, Estonia seems an exception.

A sea of blue, white and black flags, songs expressing love for their fatherland, and the cries of "Eesti" - or Estonia - erupted among the crowd and singers alike, but the mood was one of joyous celebration.

The unity extends beyond borders.

During the "Singing Revolution" two million people in Estonia, Latvia and Lithuania joined hands in a 600 km long human chain to protest against Soviet occupation of their countries with song.