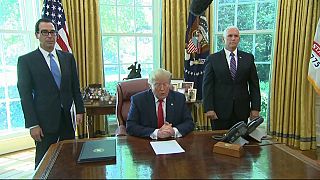 Iran's President Hassan Rouhani has said the latest US sanctions against the country demonstrate Washington's "desperation" and will not succeed.

The new sanctions came after Tehran downed a US drone last week claiming it was flying over Iranian territory.

But speaking in Jersualem this morning, the US National Security Adviser John Bolton emphasised that dialogue with Iran was still possible.

Watch the latest report in the player above