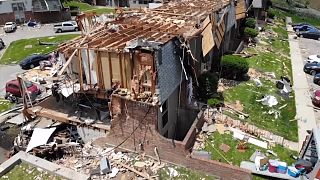 The storms were among 55 twisters that forecasters said may have touched down Monday across eight states stretching eastward from Idaho and Colorado.

The past couple of weeks have seen unusually high tornado activity in the US, with no immediate end to the pattern in sight.

The winds peeled away roofs, leaving homes looking like giant dollhouses, knocked houses off their foundations, toppled trees, brought down power lines and churned up so much debris that it was visible on radar.