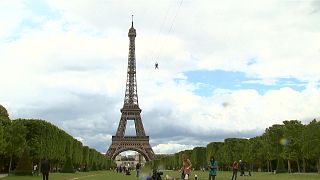 A zipline flight from Paris' iconic Eiffel Tower is offering thrill-seekers a "once in a lifetime" opportunity to see the city from above.

From May 29 to June 2, members of the public will have the opportunity to experience the zipline for free, having been selected through an online draw on social media, although there will be additional spots available to win instantly onsite, comprising an overall total of 260 flights.

The 800-metre journey begins from the balcony of the Eiffel Tower balcony and ends outside the 18th century military complex of Ecole Militaire.

The temporary zipline is an initiative by French mineral water brand Perrier, in order to celebrate the French Open, also known as "Roland Garros," and coinciding with the 130th anniversary of the Eiffel Tower.

Flights took off from the 115 metres-high second level of the monument, with a descent of almost 100 metres across one minute before arriving on the other side, meaning travellers reached a speed of 90 kilometres per hour.

Director of Communication at Perrier, Francoise Bresson, described the temporary zipline, or "Smash Perrier," as "an unprecedented experience that happens once in a lifetime," adding that they had received many requests to organise the zipline again this year, the first time being in 2017.

Perrier first partnered with the French Open tournament in 1978, and this year chose a symbol of a tennis ball smashing onto the court to pay tribute to the competition, which began on May 26 and will conclude on June 9.

2017's zipline was the first time such an event took place at the Eiffel Tower, which is affectionately dubbed the "Iron Lady," and visited by around 7 million people every year, with a total of around 300 million visitors since its opening in 1889.