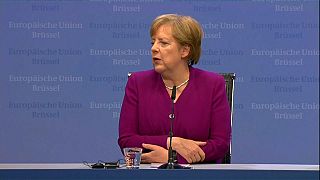 France and Germany have clashed on who should become the next President of the European Commission at a Brussels summit.

The disagreement occurred despite a positive mood among leaders at the Brussels summit.

Macron said enthusiasm for moving the EU forward is important for the role:

"The key for me is that the people in the most sensitive positions believe in our project and are the most charismatic, creative and competent people possible."

But Chancellor Angela Merkel favours the Spitzenkandidat - or lead candidate system - which pushes forward a nominee from the biggest grouping in parliament.

Diplomats said she has been dismayed by Macron's public dismissal of the man she prefers, centre-right German candidate Manfred Weber.

"It is clear that the Group of the European Peoples Party and European Democrats is still the strongest group in the European Parliament, but at the same time it has no majority any longer and now everyone has to make their own mind up.

"We agreed that we could not make a decision today."

European Council President Donald Tusk is tasked with finding names for four top EU jobs - including his own.

He had no doubt why the European Elections had gone the way they had:

"One of the reasons people on the continent voted for a pro-European majority is also Brexit.

"As Europeans see what Brexit means in practice, they also draw conclusions. Brexit has been a vaccine against anti-EU propaganda and fake news."

The haggling over who should take over the top jobs is likely to take months. However Tusk hopes to propose one name for each job to the leaders again in June, and have them approved by the time the new European Parliament convenes in July.

Udo Bullman, Leader of the Socialist and FDemocrats Group in the European Parliament said he was convinced he knew who would succeed Jean-Claude Juncker:

'I think Frans Timmermans is going to become the next Commission President. It never was about having the most votes or the most seats.

"It was always about a majority for change. Who has the majority for policy change; this is us, the socialists with Frans Timmermans.

"We are out for a new formation to reform the European Union and for policy change according to the main challenges of the European Union. That means we need a new alliance of progressive forces and you invite everyone who is smart enough to realise the real challenges in Europe and who is committed enough to provide for pro-European, progressive answers to be part of the party."

Watch Jack Parrock's full report in the media player above