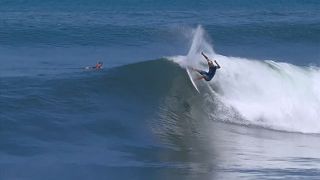 Australia's Stephanie Gilmore and Kanoa Igarashi from Japan were the winners on the third leg of the World Surf League in Bali on Saturday.

Gilmore scored only the second Perfect 10 of the season in beating her compatriot Sally Fitzgibbons - as a result, the seven-times champion returns to world number one.

Igarashi beat a star-studded field to win his first championship tour event, including 11-times champion Kelly Slater in the semi-finals.

The 21-year-old beat Frenchman Jeremy Flores in the final and moves up to second in this year's standings.