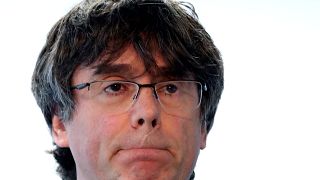 Catalonia’s Puigdemont risks arrest if he returns for election

The former president of Catalonia Carles Puigdemont hopes to win a seat in the European Parliament and the polls indicate that he could do so.

The problem is whether he can legally take it. He and his lawyers are convinced that he should be able to. But the legal services of the European Parliament indicates that he must go to Madrid to be sworn in.

"In the case of Puigdemont, he has to go to Madrid and swear to the Spanish Constitution before the Central Electoral Board, otherwise he will not be an MEP," says lawyer Ignasi Guardans.

And in that case he could be arrested, as even if elected he wouldn’t have political immunity.

"There is no immunity until the status of elected deputy is acquired and that is acquired after swearing the Constitution in person in Madrid," says Guardans.

There is also the question of which parliamentary group he would join. The Liberals expelled him citing corruption cases in which his political party has been implicated.