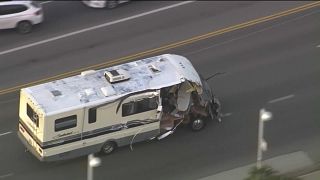 A woman in a stolen recreational vehicle led US authorities on a wild chase in Los Angeles on Tuesday, smashing into cars and a palm tree before finally coming to a halt with a large dog hanging out of the shattered windshield.

The half-hour chase began around 7 p.m. (local time) in Santa Clarita, just north of L.A., when the RV failed to yield for the California Highway Patrol.

The video showed the RV careening at speeds of up to 60 miles per hour (97 kilometres per hour) from Santa Clarita into the San Fernando Valley.

The RV hit several cars and then a palm tree in a shopping mall parking lot that tore off the passenger-side door and wrecked the front end, leaving the windshield dangling on the hood.

At one point, a large dog in the driver's lap scrambled halfway out of the shattered windshield area and tumbled or jumped from the moving vehicle, landing in the street. The RV stopped but the dog got up and appeared unharmed as it ran to the curb.

Another dog was seen dangling from the window until the RV finally rear-ended another car at high speed in a residential Tarzana neighbourhood and plowed into some trees.

The woman got out and ran with the dog following but she was quickly tackled by authorities.

The woman and the driver she hit were both taken away in ambulances. Authorities said they had non-life-threatening conditions.

The dog also was captured and led away. The other dog also was found. Both had non-life-threatening injuries, authorities said