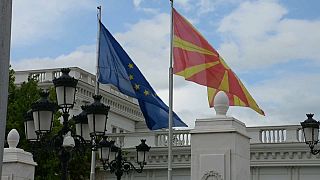 While the British Prime Minister struggles to make good on the country's decision to leave the EU, North Macedonia is waiting for the green light to start membership talks with the bloc.

The country became a candidate for the future enlargement of the EU in 2005, but has not yet entered accession negotiations.

The North Macedonian government has previously said that becoming an EU member state is its highest strategic priority, and talks are set to officially begin this year.

But, the country's position, and the EU's perspective of it, could be significantly affected, depending on the results of the European Parliamentary elections.

Analysis by the European Policy Institute suggested that the election's outcome could be crucial for North Macedonia's aspirations.

"Given that the country has been in limbo waiting for such negotiations for about a decade now, for us these elections are at the crucial point where they might make it or break it, as we say. Because given the huge breakthrough that the country did last year, it needs a push towards European enlargement through the start of accession negotiations," said Simonida Kacarska, the institute's director.

Many North Macedonians are eagerly awaiting the negotiations with the EU, but are keeping an eye on the outcome of the European elections.

The university has been holding a simulation of the work of the European Council, with students representing member states.

They have called on Bujar Osmani, the Vice President for European Integrations, to present arguments as to why North Macedonia should start membership negotiations.

"The only engine, the only transformative power, the only glue of societies is the European idea in the Balkans. You take that off, and you create a turmoil and, I would say, a very unpredictable situation for the region, which would be a loss for Europe itself, but also for the region," Osmani said.