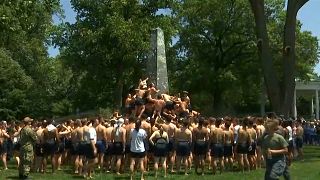 Members of U.S. Naval Academy's first-year class tested their ingenuity, perseverance and ability to work together as they attempted to scale a granite obelisk coated with a thick layer of vegetable shortening on Monday (May 20).

The annual Herndon Monument Climb requires participants to form a human pyramid with the ultimate goal of placing an upperclassman hat on the tip of the 6.4-metre obelisk.

The climb is the culminating event for the first-year class at Annapolis and marks their transition from 'plebes' (first year) to midshipmen.

After several attempts that saw the plebes sliding down the obelisk and falling on top of each other, the class completed their task one hour, five minutes and five seconds.

Christian Schwien was the first-year who landed the midshipmen's hat on the tip of the obelisk.

Plebes have been participating in the annual climb since 1962 with grease added to the challenge sometime in the late 70s. The longest climb, four hours and five minutes, took place in 1998.