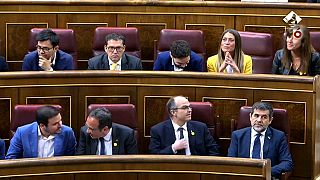 Spanish first as jailed Catalan leaders sworn in at parliament

In an unprecedented move, five Catalan leaders were allowed out of prison on Tuesday to be sworn in at the opening of the Spanish Parliament.

It is believed to be the first time that elected, imprisoned individuals have been allowed into the assembly.

They are currently being held in prison, awaiting trial on rebellion, sedition and embezzlement charges. It is linked to their role in the 2017 Catalan independence referendum, which Madrid later declared illegal.

On Monday, they were escorted to parliament to collect credentials. Their trial has been put on hold but is expected to resume on Wednesday.

However, despite their election success, there is doubt over whether the politicians will be able to take part in debates.

Under Parliamentary rules, any member placed in temporary detention is automatically suspended.

Junqueras took to Twitter to thank his supporters and voters as he took his seat: ''A million thank yous,'' he wrote.

''We are sitting in parliament because the polls decided so. Catalonia and the Catalan people led us to parliament, despite some not wanting us to be there'', the Catalan separatist MP Josep Rull tweeted.

''The ballot box decides. Be wary of the free will of the Catalan people'', Jordi Sànchez added.

There decision to sit with the rest of parliament was denounced by Carles Puigdemont, the leader of the Catalan separatist movement which declared Catalonia's independence from Spain after the 2017 vote. He has fled the country and now lives in Belgium.

The five were nonetheless welcomed to parliament, with some MPs clapping as they entered. Pablo Iglesias, the leader of the left-wing Podemos party, hugged them as they joined the Cortes house.

The Catalan separatists might be crucial for the Spanish government to form a coalition. The Socialists, led by Pedro Sánchez, won the April elections with 123 seats in the lower house, but they did not achieve a majority.

To form a coalition, the Socialist party is eyeing an alliance with Podemos' 42 seats and would need yet 11 more seats to have a majority. They could find them with Basque nationalists or the Catalan separatists.

Not everyone is happy that the jailed Catalans are sitting, however. MPs from the right-wing Conservative Popular Party (PP) and the centre-right Ciudadanos party have claimed they will try to get them suspended from parliament, which would ban them from attending parliament sessions.

If the five Catalan separatist leaders are suspended, the majority in Parliament would go from 176 seats to 174, making Prime Minister Pedro Sanchez's attempts to form a coalition much easier.

He would be able to reach a sufficient majority without the support of the Catalan parties and the separatist Basque party Bildu.

Receive our newsletter on your smartphone