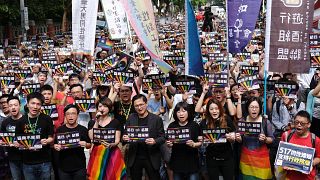 Taiwan has until May 24 to legalise same-sex marriage after a 2017 ruling by the island's top court. The court did not give specific guidance on how laws regulating such unions should be drawn up.

Parliament will vote on Friday (May 17) on same-sex marriage but there are three bills that have been proposed: one by the government and two by lawmakers which LGBT+ groups have described as discriminatory.

The legalisation of same-sex marriage in Taiwan has become complex after voters opposed marriage equality in a series of referendums last November, dealing a blow to the island's reputation as a beacon of liberalism in Asia.

More than two-thirds of those who voted in the referendum wanted to retain the definition of marriage as between a man and a woman under the civil law.

Since the court's decision two years ago, Taiwan has seen a backlash against marriage equality by conservative and Christian groups, who are calling for same-sex partnership in the form of a civil union and are opposed to a bill proposed by the legislature that aims to include same-sex marriage in Taiwan's civil code through an amendment.